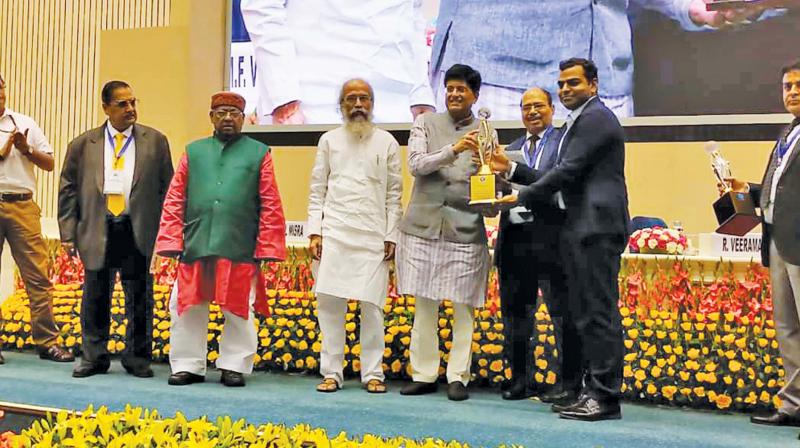 TIRUNELVELI: Tirunelveli-based beach mineral industry, V V Minerals, caught in troubled waters since 2016, retained its prestige of being the country’s highest exporter of processed minerals for the fiscal year 2015 – 2016 and 2016 – 2017.

Managing partner of V V Minerals, V Subramanian, received the honour from Union minister of Commerce and Industries, Piyush Goyal, at a formal function organised by the Chemicals and Allied Products Export Council (CAPEXIL) at the Vigyan Bhawan auditorium in New Delhi, on Wednesday.

Expressing delight about receiving the award, Subramanian said that this award would boost the morale of his workers on whose behalf, he said, he had received the award.

Referring to Goyal’s motivating speech at the function that he was ready to react positively to the demands of the chemical and allied industries to expand its footprints to reach the set one trillion export target, Subramanian hoped to see the effects of the minister’s words in reality.

V V Minerals set an record by exporting 4,71,773 metric tons of heavy minerals that included garnet, ilmenite, rutile and zircon for the year 2015-16 and 4,04,048 metric tons for the year 2016 – 2017. V V Minerals continued to retain its top exporter position among the chemical and allied industries numbering around 3,500 in the whole of India.

The Garnet India Private limited, a sister concern of V V Minerals, also was given a certificate of merit for its high export volume of processed minerals.