There’s bleakness in the warm afternoon air in south Goa’s Costi village; because there’s a big question mark on the future of mining operations in the area, which was heavily dependent on the nearby Chowgule iron ore mine. For 26 years, Rama Naik, a resident of the village,
worked at that iron ore processing plant and earned enough to run his household. Now, he is barely scraping by. “I used to earn Rs 30,000 a month by working on beneficiation at the plant when mining was on. Now, I do odd jobs and don’t even get Rs 3,000 every month. The
past three-four years have been tough; when mining came to a complete standstill, I quit. I have no hope it will ever resume,” Naik said.

Costi is around 65 kilometres from the Goa capital Panaji. The village and its roads, previously full of lorries and trucks transporting the ore when mining was in full swing, now wear a forlorn look. These mines, which used to employ hundreds, now have a lone security guard to
keep trespassers away. The locals often reminisce about the days when one had to navigate through the long lines of trucks and packed roads to go about their daily chores.
And though many see the mining issue and elections as unrelated, they aren’t blind to political parties using the issue as “an election tool” to make new promises about restarting mining. Goa, which voted on 23 April, recorded a voter turnout of 74.72 percent in the Lok Sabha elections and 80.25 percent in the three Assembly bypolls held simultaneously. 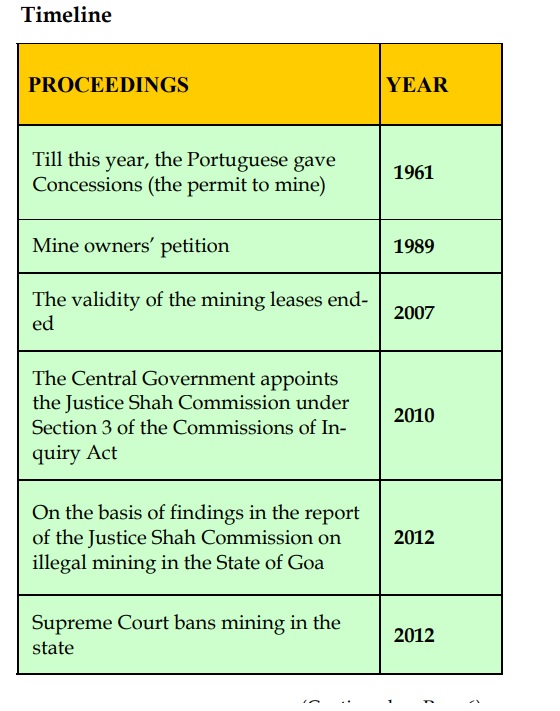 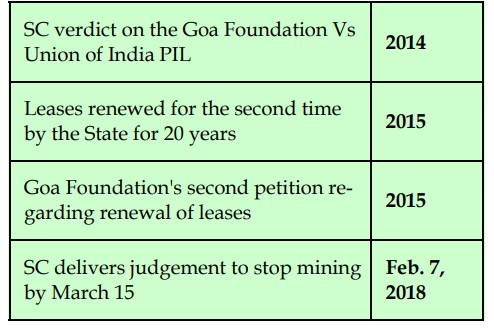 The story of Costi is the story of all villages situated on the state’s mining belt, which, according to geologists, extends diagonally from Pernem in north Goa through Bicholim, Sattari, and Quepem to Sanguem in south Goa. Since 15 March, 2018, 88 mines have become inactive after a ruling by the Supreme Court on a petition filed by the NGO Goa Foundation against the renewal of the mines’ leases by the state government.

“The Supreme Court clearly asked the state government to issue fresh leases through an auction. [This was a verdict to a writ petition by the Goa Foundation on the illegality of mining
in the state in 2014] Instead of doing that, the state renewed the existing leases. We brought the issue to SC’s notice again, and in 2018, it ordered shutting down of mines operating under a renewed lease. The state has not adhered to the court’s instructions. Our recommendations were to put a cap on the amount mined and also to form a special permanent fund from the mining earnings for the welfare of the people of Goa,” said Claude Alvares, president of Goa Foundation.

There are also other organisations in the state that have been up in arms against the illegal mining due to its environmental implications. Abhijit Prabhudesai, a farmer and general secretary of the Federation of Rainbow Warriors, said that after mining stopped, the agricultural yield in the mining belt increased by nearly 70 percent.

“Farmers who were troubled by the lack of water due to mining have said their yields have increased manifold. The mining that took place in the 90s and 2000s went unchecked and, as a
result, mines were dug even below the water table. In the mining belt, people are facing a water crisis, so most of the locals don’t want mining to resume. In a short span of 20 to 30 years,
our generation has depleted more than half of our iron ores. So it’s only fair that we let the future generations decide whether or not mining should resume after 20 years,” he added.

At the mercy of the mining lobby?

Who wants mining resumed? To this, Prabhudesai replied that it is in the interests of the influential mining lobby, which consists of business families and those who own the leases and
have invested heavily in the mines. The mining lobby in Goa is exceedingly powerful, and the lease owners don’t want fresh leases through auctions; they fear that larger corporations will take away their leases. It is also alleged that the state government is stalling the resuming of mining at their behest. That’s why this is a contentious issue, especially with the ongoing Lok Sabha elections.

In 2018, nearly 25,000 people whose livelihoods were affected after the ban on mining came together to form Goa Mining People’s Front. Since then, the front has become a voice of the mine workers, truckers, mechanics, and small shop owners. Its president, Putti Gaonkar, said, “The government filed a petition in the SC only this year. This clearly shows how the state wants to use this issue as an election tool. Nearly one-third of the population in the state has been affected by the ban. The people in the mining belt are angry, and I am sure they have given a befitting reply to the government in the elections.”

Only two seats in the Lok Sabha are from Goa: north and south. For the past 20 years, the north Goa seat has been held by BJP’s Shripad Naik. The BJP has held the south Goa seat twice in the
past 20 years (in 1999 and in 2014). Also, BJP-led governments have ruled the state since 2012. For the party, winning the two seats in a state long considered its bastion is a matter of prestige.

The Opposition, however, alleged that there is a nexus between the mining lease holders and the government. Avinash Tavares, spokesperson for the Goa Pradesh Congress Committee, said, “For the past five years, the BJP government has not provided any alternative to the people (truck drivers, miners, etc). They are holding these people ransom, saying they will bring mining back only if they vote for the BJP. The party fooled the people in 2014 and is at it again this year. We, however, would like to promise that we will bring mining back in a sustainable manner, through auctions and a mining corporation.”

The government, on the other hand, rubbished all the allegations and said it is confident of winning both seats. Minister of Power and MLA from Curchorem (south Goa), Nilesh Cabral said, “We promised during the 2014 elections to resume mining, and we did.

Meanwhile, the same court is yet to reach a verdict in another case regarding the 1987 Act (Abolition of Mining Concessions and Declaration as Mining Leases Act), which is now at the constitutional bench. In that case [in the Supreme Court for the last 20 years], the apex court asked us to allow mining until a judgment was delivered, while another bench hearing the NGO’s petition stopped mining. As a result of this duality, we are unable to take any concrete action. The people of Goa know it was the Supreme Court decision that led to these problems, and they also know that our government, led by Prime Minister Narendra Modiji, will work
only for their benefit.”

The issue is an intricate one. Almost everyone alleged wrongdoing by the government at the behest of the mining lobby, while a few are optimistic that the government is working in the interests of those dependent on mining.